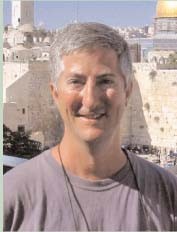 Learn how war and ecological disaster plagued the Mediterranean, from Dr. Eric H. Cline, professor of Classics and Anthropology and the current Director of the GWU Capitol Archaeological Institute at The George Washington University.

In this compelling lecture, Dr. Eric Cline (George Washington University) will discuss his recent book 1177 B.C.: The Year Civilization Collapsed, which tells the gripping story of how the end of the Late Bronze Age was brought about by multiple interconnected failures, ranging from invasion and revolt to earthquakes, drought, and the cutting of international trade routes. Bringing to life the vibrant multicultural world of these great civilizations, he draws a sweeping panorama of the empires and globalized peoples of the Late Bronze Age and shows that it was their very interdependence that hastened their dramatic collapse and ushered in a dark age that lasted centuries.

The book was the winner of the 2014 Award for the Best Popular Book from the American Schools of Oriental Research and an Honorable Mention for the 2015 PROSE Award in Archeology & Anthropology from the Association of American Publishers. It was one of The New York Post's Best Books of 2014, one of The Australian's Best Books of the Year in 2014, and was nominated for a Pulitzer Prize.

Eric H. Cline is professor of classics and anthropology and director of the Capitol Archaeological Institute at George Washington University. An active archaeologist, he has excavated and surveyed in Greece, Crete, Cyprus, Egypt, Israel, and Jordan. His many books include From Eden to Exile: Unraveling the Mysteries of the Bible and The Trojan War: A Very Short Introduction.

This is the first lecture in the 2015-2016 Partnership for the Academic Study of Early Judaism annual lecture series and is free and open to the public. The lecture will be followed by a book-signing and reception. We hope to see you there!