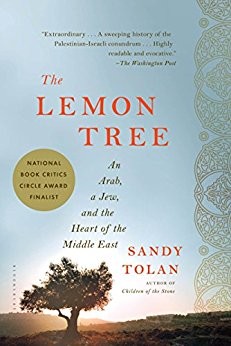 Hope to see everyone for our Tuesday, November 14th*,  Hadassah Book Club meeting. We meet in the evening at 7:30, at the Barnes and Noble Bookstore on Kingston Pike in the coffee shop area. For November we’ll be discussing The Lemon Tree by Sandy Tolan
*Normally we meet on the third Tuesday of the month, but because of Thansgiving, we will be meeting on the 14th.
From Goodreads.com:
The Lemon Tree
In 1967, Bashir Al-Khayri, a Palestinian twenty-five-year-old, journeyed to Israel, with the goal of seeing the beloved old stone house, with the lemon tree behind it, that he and his family had fled nineteen years earlier. To his surprise, when he found the house he was greeted by Dalia Ashkenazi Landau, a nineteen-year-old Israeli college student, whose family fled Europe for Israel following the Holocaust. On the stoop of their shared home, Dalia and Bashir began a rare friendship, forged in the aftermath of war and tested over the next thirty-five years in ways that neither could imagine on that summer day in 1967. Based on extensive research, and springing from his enormously resonant documentary that aired on NPR’s Fresh Air in 1998, Sandy Tolan brings the Israeli-Palestinian conflict down to its most human level, suggesting that even amid the bleakest political realities there exist stories of hope and reconciliation.